Full article: How to save kate in life is strange?

The warning signs were there from the start of the second episode: the lethargy, the withdrawal, the continued conversations about the hopelessness of her situation and even the dark rings around her eyes. I had a sinking suspicion that Kate, the shy, religious classmate of Life is Strange‘s main character Max who had been suffering extensive bullying since before the game’s events began, had become severely depressed and was considering taking drastic action. Her morale seemed to be dropping lower and lower. I feared the worst: that my actions (and lack of action) as Max combined with the relentlessness of her classmates would drive her to take her own life. So I did everything I could to be supportive, even at the expense of my relationships with other characters. Ultimately when I did find Kate on the roof, steps away from jumping, I was able to talk her down, something not every player was able to do. But Kate’s act still came with a heavy emotional toll, and it ultimately forced myself and even the other characters in the game to examine the agency and responsibility we had over Kate’s decision. Employing the natural agency that video games naturally grant their players as well as its diverse cast of characters, Life is Strange forces players to confront feelings that are often all too real for the friends and family members of suicide victims, which results in a very potent and eye opening gaming experience.

After the release of the second episode, online message boards exploded with with discussion of Kate’s tragic journey. It left players, myself included, reeling and collectively shocked. One person described the scene as “intense” and noted that they panicked while trying to talk Kate off the ledge, an experience that many others admitted that they shared. Others found it hit close to home and shared stories of how it reminded them of their experiences with suicide. Still others were surprised that a video game would even tackle such a raw and sensitive topic, let alone do so in the way Life is Strange had. Regardless of whether players were able to save Kate or not, it was hard for anyone to deny that the scene had a strong emotional impact and resonance. Although certainly a potent moment in its own right, this impact stems in large part from Max’s inability to use her powers. Throughout the entire series thus far, Max has been able to rewind time to prevent everything from a friend being shot to her being caught in social snafus to a classmate being hit in the head with a football. At first Max is hesitant about her new powers, but with all of the success she begins to have and with Chloe’s constant goading, Max begins to use them more and more. We, like Max herself, begin to rely on them to guide our actions and inform our decisions. We can’t see what the long term consequences of our choices will be, but we can see how characters will immediately react and make judgements with this in mind. But when we finally get up to the roof and begin to talk with Kate, we can’t rewind. Suddenly every dialogue option we choose becomes the difference between Kate living or dying. Although in the context of the game’s narrative Max is the one interacting with Kate, the game shifts the agency fully onto the player. We become the ones responsible for Kate’s life and, at least in that moment, the burden is entirely on us to

prevent her from jumping. If we were able to rewind and select a different dialogue choice if we things started going bad, the moment would have certainly lost some impact.

After all, as I was trying to get Kate to put her trust in me, I was mentally thinking about all the actions I could have taken to have possibly made this conversation easier. Earlier in the series I had told her to avoid going to the police despite the suspicion that she had been drugged at a popular high school party so I could gather more evidence and protect her, and she confronted me with that fact on the roof, expressing the hurt she felt from my suggestion to not pursue action no matter how well intentioned it was. I’d also forgotten to erase the link to her infamous video Victoria had left on the girls’ bathroom mirror. Thankfully I had been a bit of a snoop in the game and had discovered the relationship she had with her sisters and other small details by searching through her room that had allowed me to reason with her, but it had still made me question all the previous decisions I’d made regarding her and the role I, as Max, had played in driving her to her point of desperation.

While episode 2 ends with you considering the consequences of your actions, episode 3 begins by revealing that other characters throughout the series are participating in similar internal conversations. For instance, after searching through the dormitory, you come across Dana, another student at Blackwell who is visually upset and in shock regardless of whether or not Kate died or was saved. On her computer are records of her having sent emails about how shaken she was and how much she want to “have done more to help her.” She also describes how she wished that she and others had had the courage to go up on the roof to save Kate. You can also choose to either comfort or blame Taylor, one of the many characters who bullied Kate. After being shocked at her concern over Kate given the role she had in Kate’s daily torment, Taylor responds by saying “I’m my own person, not Victoria’s b****. . . Hello, like, she’s freaking too,” indicating that even Victoria and her clique, in all their maliciousness, seem to be feeling the weight of the situation. Even the principal seems to be concerned as you stumble upon him drunk on his porch step. 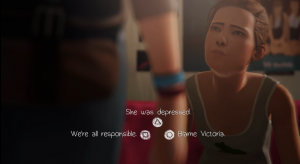 In this way, Life is Strange expands the discussion even further by allowing us to witness how characters with a variety of different opinions about and relationships with the victim are responding to the situation and encourages us to make judgements regarding how “at fault” they might be. Dana plays the friend who, while not necessarily antagonistic or negative towards Kate, wishes she had been more proactive in helping her. Taylor is the bully who fully begins to realize the consequences of her actions and wants to repent. The principal and Mr. Jefferson are both authority figures who realize they should have done more to step in and prevent the situation. All are figures who could be considered responsible for Kate’s decision.

Discussing blame and responsibility when it comes to suicide is a tough and complex subject best approached by examining a variety of perspectives. Life is Strange begins this conversation by thrusting Kate’s fate into your hands and asking you to assume full agency over the consequences. It continues it by having you watch the rest of Kate’s peers process their own fault and asking you to decide where this fault really does lie. Though some choices (particularly dialogue choices) are certainly “kinder” than others and though you definitely are trying to figure out the details behind Kate’s incident, the game itself doesn’t provide any answers for the ultimate question of “Who or what caused Katie to want to commit suicide?” This is a question it asks you to solve, using its narrative and gameplay elements to guide you along.

How to Choose the Best Bra to Push Breasts Together? (5 expert tips)

Running With Your Dog: 6 Rules To Keep In Mind

How To Make A DIY Pet Prom Suit

How and Why to Be a Tree

The Be a Tree program is a dog bite prevention seminar program for school age children. This program focuses on fun and interactive activities to teach children how to read dog body language and how to act safely around their own dog and strange dogs.